Film Review - The Call of the Wild (PG)

I'm glad you're enjoying this! 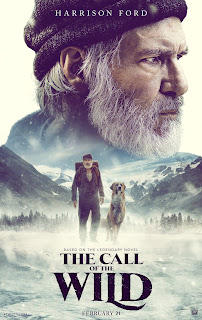 I read Jack London's The Call of the Wild at secondary school and remember it to this day. The reason? All that blood and brutality. Starving sled dogs, canine fights to the death, mass-drowning when the ice gave way. Multiple throats getting ripped out, for heaven's sake. It's one tough, compelling read for a group of young lads in their early teens and - if lifted straight off the page - could make for nothing short of an R-rated movie. So how Disney hoped to turn it into a family-friendly PG that worked on screen baffled me. Well I've seen it - and still I'm baffled. Even with Harrison Ford on board, quite what was the House of Mouse thinking? 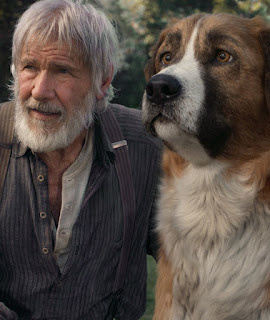 In this version Buck is still an oversized and lovable mongrel (part St Bernard, part collie) living a pampered late 19th Century existance in Northern California with the wealthy Miller family. That's until foul play sees him dog-napped and sold to a sledging team that travels a route running far into the gold-prospecting territory of the Yukon. It's a struggle for doggie survival in the frozen Canadian wastelands and the domisticated Buck is less prepared than any. But his dreams are full of untamed canine ancestors and soon he starts to toughen up. His various human masters - Ford's John Thornton among them - are his final tie to that old world and all that's preventing him from answering the 'call'.

My main problem with the adaptation is this... It's the 'wild' that's shouting out for Buck, which suggests that by the end of the story he'll be nothing short of feral. But this is a Disney-fied dog tale and Buck manages to cling onto all of his rabbit-loving cuteness throughout. Anything short of that would clearly be deemed unpalatable for the young audience at which this show is primarily aimed. If wolf-dom is Buck's destiny, then he'll be - you know - the cuddly kind of lupine.

This unfortunate sentimentality is reinforced by the film's use of CGI. I'm not suggesting for a second that this dog-versus-nature story should have been told using real critters - animal rights groups would have had a justifiable shit-fit if that had been the case. But while the beasts are undeniably animated with skill, they're humanised to a level of soppiness that at points becomes truly nauseating. Whatever else last year's reimagined Lion King might have been accused of, it deliberately steered away from this kind of cutesy anthropomorphism (and got no thanks for it from many quarters). Here the dogs get up to all kind of arch antics and the whole movie gets dragged under the ice as a result. There are no literal drownings here, or any true savagery for that matter -  which turns it into 'The Call of the Marginally More Bitey'.

I submit that Ford is as good as you'd expect, all grizzled and amiably grouchy as Thornton. But even he's got a maudlin back-story for why he's in the Yukon that simply doesn't matter. Likewise sled teamsters Perrault and Francoise (ably played by Omar Sy and Cara Gee) are weighed down more with embarrassing doggy shtick than with the payload they're dragging. And while the arctic vistas are as beautiful as you'd expect $100 million to buy (yes the production costs were that high), no money can compensate for the lame treatment of the story. 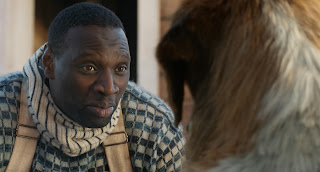 But it's a kids' movie, you may well argue, but seriously - the source material here isn't Lassie. Just because the protagonist goes 'woof' doesn't make a story suitable for little'uns, or at least it shoudn't. The literary Buck chewed his way through no little amount of flesh and sinew on course for the wild, while this computerised movie version is all but vegan. No wonder the whole enterprise feels so bloodless. Sometimes a vast budget and top-drawer production values aren't enough. Not when the underlying narrative has been flubbed as badly as here. Seriously - how can you respond the the wild's call when your bite has been removed?

Memorable Moment: Fiercesome Buck lets a bunny live - the moment this whole experience died for me.

Ed's Verdict: 4/10. Jack London's tale is gutted of everything that made it vivid and real. The result is an exercise in blandness that everyone, children included, will quickly forget.